Been interested for a while now in bug bounty programs. But going through the immense amount of data available online made me realize that these data must be put in order first. My trials so far were pouring more hay onto the haystack. I can’t find any needles.

And while there are some publicly available work flows from some amazing people. Like capt-meelo, and NahamSec. I thought I need to build my own.

Yeah, I can hear some thinking “Not again, another work flow and another recon automation tool” ,and, I immediately remembered the infamous XKCD standards post

But, I want to go through more than this actually. I don’t want to hit you in the face with a tool or a diagram. I want to walk you and me through the thought process. I want to study existing tools and try to make something better. Sounds good?

Moreover, Most of the workflows stop at the recon phase. I will try to go beyond that.

Characteristics of a workflow

This workflow should help us in gathering information and organizing the data presented. We don’t want to get lost - especially with these large targets - or overwhelmed by the amount of data. A workflow usually is backed up by some kind of tools/scripts for automation and efficiency.

On a high level, a work flow should be:

I think these are good starting points. Thinking the tooling or scripts through, I the below sounds the best approach IMHO:

Goal of a workflow

I went through many public posts and ended up with a feeling similar to the image above. Now what?

An extensive recon process - which is indeed needed - that gives you a gigantic haystack. I was left with a feeling I should be looking for an exposed tomcat admin panel, or something similar. Of course, I was wrong.

Don’t get me wrong, the writeups are awesome, almost all of them. But when combined, I was left with that attitude. It might be just me. So I decided to clear up the goals a little bit.

What is an expected goal of a workflow?

First, what are the steps of a workflow (IMHO)?

How should we decide where to focus our investigation or hone in? Consider answering the below questions to decide

With all that. We go back to our question “What is an expected goal of a workflow?”

A workflow is your routine, your thought process or mind map, a reference to go back to if you get lost. Backed up by tools for automation and efficiency. Otherwise, it is so easy to get lost.

Now I will go try to design my workflow. Will update this post when am done. 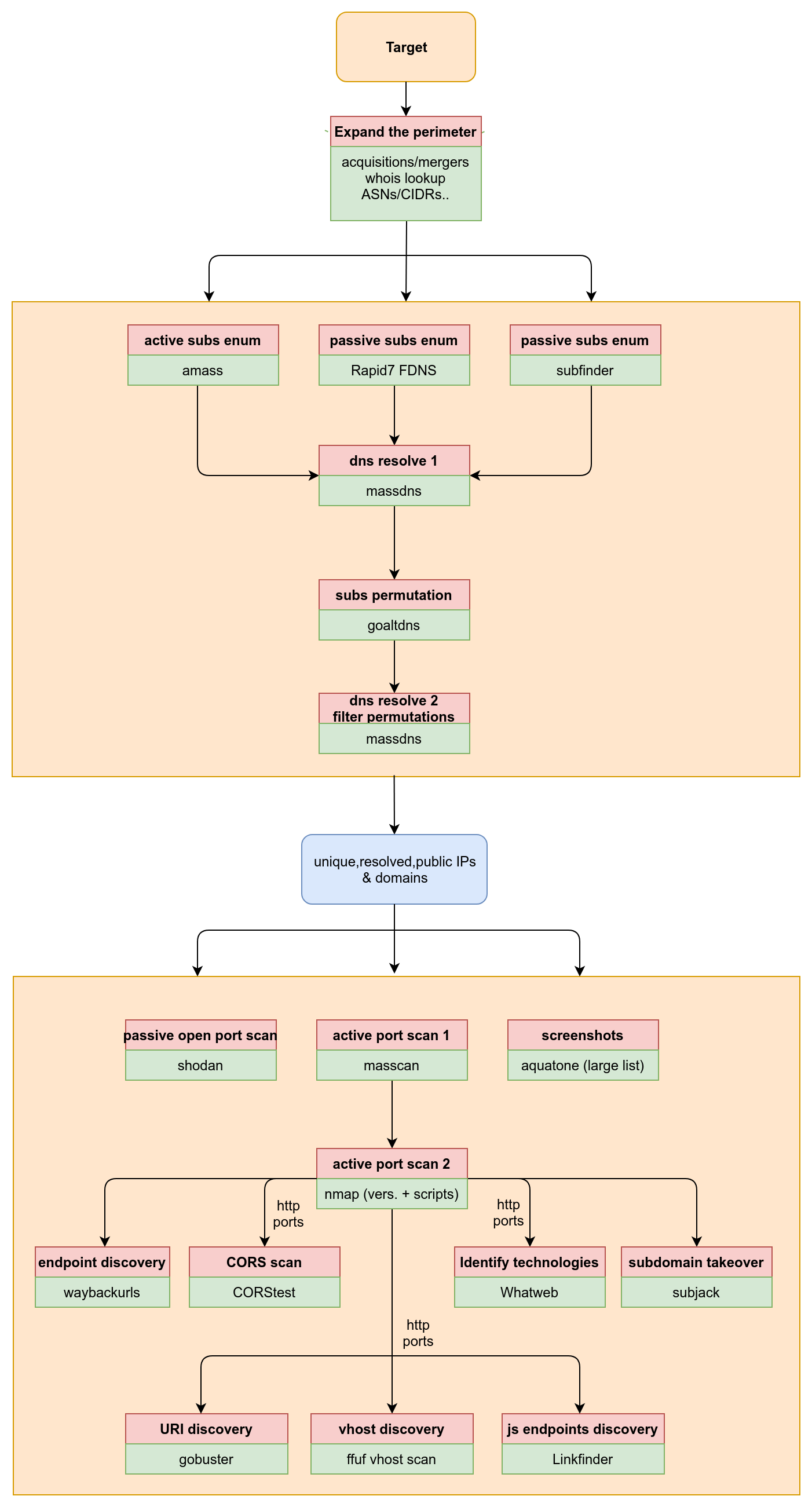 This workflow is an outcome of studying the awesome work of 0xpatrik,phspade and diving into the amazing script (Chomp-Scan) by SolomonSklash.

You’ll notice the following in the shared workflow:

Now, to explain some of the design decisions:

As I mentioned, I find the work put into chomp-scan is impressive. So, I think I might use it as a starting point. Yet, I think it needs some work. And, I think I might be able contribute that to the project, open source FTW.

On that note, I will end this blog post. And, will start working on modifications of chomp-scan. If you have any comments or additions to the suggest workflow I will assume you know how to contact me ;).